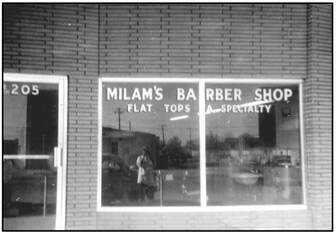 Milam's Barber Shop, 205 East Seventh
How did the Demon Barber Shop get its name?

Probably everyone knows the story, but some newspaper clippings brought to the museum recently told the history of the name.

When Jay B. Funk was in junior high school, he began working at City Barber Shop, 114 N. Dumas Ave., after school and in the summers. He decided that barbering would be his career and started going to barber college in Amarillo while he was in high school.

He graduated in 1956 and began full time work at Milam's Barber Shop, 205 East Seventh. The shop was owned by James Earnest Milam. He worked as an employee for a while, then as manager and in 1961 bought the business and changed the name to Demon Barber Shop.

Jack Jameson, also a 1956 graduate, went to barber school and earned his license and joined the shop in 1957. Jay B. and Jack became partners in 1960, not only in the barber shop, but also in collecting Demon sports information. Both were big supporters of Dumas sports and kept files of newspaper clippings, programs and photographs related to the teams. 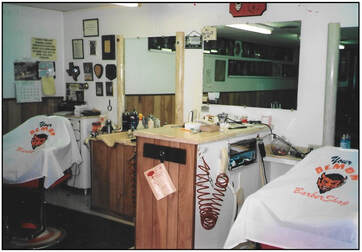 In April of 1961, the two moved to a new location at 119 East Eighth and the Demon Barber Shop was in its permanent home. The walls of the new shop reflect the championships as well as the "near-championships". Scrapbooks and files were moved to the new location and continue to grow as more sports milestones are reached.

Both owners of the shop were known for their knowledge, not just as barbers, but for the history of Demon sports. They could tell you which teams won in what years and who were the best players without having to look in their scrapbooks of files for the answers.

Jay B. left the partnership briefly once when he moved to Possum Kingdom in north central Texas, but returned to Dumas eleven months later.

Jay B. was elected Dumas city commissioner in 1981 and frequently barber shop talk involved city matters, but the favorite topic was always sports.

Jack bough Jay B.'s interest in the shop when Jay B. opened a barber college in Amarillo in 1991.

Today, Jack is owner and is still barbering at the same chair in the shop and Jay B's son, Mike, is working at his dad's chair. 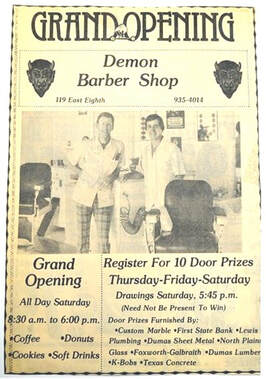