One of the most famous bank robbers in U.S. history was John Dillinger. In the 1930's, he and his gang were committing robberies across the Midwest, even Florida and Arizona. They were robbing banks, stealing cars and killing those who got in their way.

Dillinger was caught more than once, put in prison, but always managed to escape. One of his escapes was from a jail that was considered escape-proof. Using a razor blade, he carved a pistol from a piece of wood, blackened it with shoe polish and used it to force his way past guards.

He was finally trapped and killed by the FBI as he left a movie theatre on July 22, 1934.

That was the Dillinger story from the Chicago area. The Texas Panhandle had its own Dellinger story in July of 1930. Lon Dellinger and his brother, Orrell, had alleged charges of kidnapping and jail break in Dallam County. 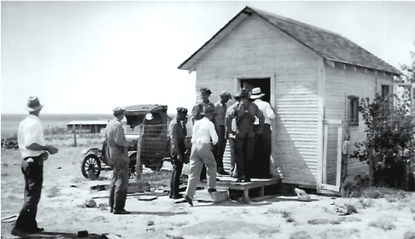 Gunnels lived on the farm with his wife, Dollie May, and their children, Eva and Denny. He told the sheriff that the gangster was not on the place but had left an hour earlier.

Sheriff Alexander thought he should search the buildings and the three lawmen separated to look in the houses and outbuildings.

One report of the incident was that Lon Dellinger was hiding in the privy, was apprehended by the sheriff as they started to the car. Seeing what was happening, Orrell Dellinger, brother of Lon, raised his pistol and shot the sheriff in the forehead. The sheriff fell to the ground.

Hearing the gunshots, Deputy Foust burst into the house where Lon, Orrell, and Lon's wife had fled. Foust shot it out with the Dellingers, killing Lon and wounding both Orrell and Mrs. Dellinger.

Damron was cut off from his car and thinking both Alexander and Foust must be dead, he ran to the road to flag down a passing car. Doctors G. W. Dawson and K. W. Pieratt were summoned and were first to arrive on the scene. Sheriff Alexander died on the scene, some 40 minutes after the shooting. Orrell died a few days later in a Dalhart hospital. Dr. Pieratt later moved to Dumas and practiced medicine here for many years.

Another account of the shoot-out was that the men were found hiding in the house. Sheriff Alexander and one of the officers entered the front door while the third officer entered the back door. Hearing the shooting, the officer who entered the backdoor started shooting and killed Lon. He then shot Orrell, who was armed with a shotgun and wounded Lon's wife.

Sheriff George W. Alexander was born in Tennessee and died in Hartley County at age 53.

Whichever story is most accurate, the end results were that the Dellingers from the Texas Panhandle and their crime spree ended witha Chicago-style shoot-out just like the Dillinger shoot-out in Chicago. 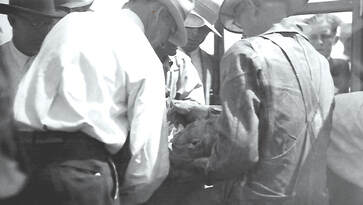 Sheriff Alexander being carried out on a stretcher