Daugherty Family Came to Moore County in 1904
By Glynda Pflug 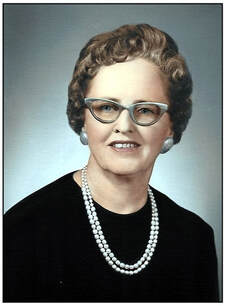 Jessie Glynn Burnett
Window on the Plains Museum has special connections with a couple of the early Moore County families -- the W. W. Daugherty and A. B. Burnett families.

The museum was built on land that was part of the A. B. Burnett ranch and the museum building was made possible, in part, by a bequest from Jessie Glynn Daugherty Burnett.

But, the story starts in November of 1900 in Spring Creek Community in Cooke County, Texas when William Wallace Daugherty and Lillie Ann McBee were married in a double ceremony. Lillie Ann's younger sister, Luella, and Shirley Parks were the second part of the double wedding. The wedding was in the home of the brides' parents.

The young couple lived in his grandfather's old home for the next few years and their two children, Jessie Glynn and John William were born in Cooke County.

In 1904, W. W. with his father, John McGill Daugherty, came to Moore County where W. W.'s Uncle Seab Crutchfield was living in the Middlewell Community. They bought land there for $4 an acre, but went back to Cooke County.

In September of 1906, W. W. came back to Moore County with all his possessions, planning to build a house on his land so he could bring his family also. Lillie, Jessie Glynn, age 5, and John William, age 3, joined Wallace in November. Their house was not quite finished so they lived in a half dug-out on the John Feltz farm for a few weeks.

At this time, Middlewell was the best settled section of land in Moore County. According to school records, families living in Middlewell were the Barbers, Cecil, Bishop, Jackson, Dye, Sambaugh, Roland, McFarlin, Daugherty, Garrett, Frye, and Hovencamp.

The following spring, W. W. started farming operations. He broke out sod with a walking turning plow and planted a crop which was completely hailed out in the late summer. W. W. freighted with two mules and two horse, hauling freight between Channing and Dumas.

In 1908, W. W. was elected county commissioner from Precinct Three.

There had been a school house near the Daugherty farm, but the building burned. In 1909, W. W. gave the school district land in the southeast corner of his property for the new building. Both Daugherty children started school in that little one room with Miss Chloe Weidling as teacher. The building was also used as a community center and church services were held every Sunday. A minister would come about once a month and there would be an all-day service with dinner on the grounds.

W. W. ran for District and County Clerk in 1913 and traveled over the entire county on horseback campaigning for the office. He won the election and moved his family to 1022 S. Meredith Street in Dumas the following January so he could take care of his new responsibilities. He held the office until he retired in 1932. He only had one opponent during the years he ran for reelection. He served as county commissioner for Precinct Three for six years and as County/District Clerk for 18 years.

When the family moved to Dumas, Jessie Glynn remembers "Dumas was a very small place at that time. There were two stores, I believe, and, of course, the old frame courthouse building and the bank and just a handful of residents." She remembers her mother saying there were no houses between their home and the courthouse. She never know how many to expect for lunch as her husband would invite anyone who wanted to come for the meal. She would watch the courthouse until she could count the number so she could set the table. There were no restaurants in Dumas at that time.

Jessie Glynn went to school in Dumas for the next year and a half, finishing the eighth grade. Dumas schools only went through the tenth grade, so she went to Gainesville to live with grandparents to complete high school. John finished school in Dumas, then went to Texas Military College at Terrell. He later attended West Texas State and Texas Tech. He was killed in an automobile accident October 2, 1929.

In 1927, she married Gaye Crigler who worked with the geographical department for Marland Oil Company, operating a magnetometer. They lived in New Mexico, Oklahoma, California and Texas.  In the early 1930's, they returned to Dumas where Gaye became president of First State Bank and Jessie Glynn worked as cashier. Gaye died in 1936.

The Burnett family story began in 1893 in Hall County, Texas. O. B. Burnett was introducing a new crop -- cotton to the area. In 1917, he extended his cotton growing to Moore County and in 1924, opened the first cotton gin north of the Canadian River. O. B. married Martha Elizabeth Watkins. When they came to Moore County, they settled on land west of the Dumas Townsite section. They were parents of nine children. Arthur Brice (Chink) was next to the youngest.

In 1939, Jessie Glynn and Arthur Brice Burnett were married and for the next ten years they owned and operated Burnett Machinery Company in addition to farming and ranching. They sold the machinery business in 1948. A. B. died in 1951.

Jessie Glynn continued farming and ranching following her husband's death. She was an accomplished seamstress and antique collector. She was involved in community activities, was an amateur photographer, enjoyed giving book reviews and doing needlework. She was a former member of the board of directors of the museum. The original display room at Window on the Plains Museum is named for Jessie Glynn.