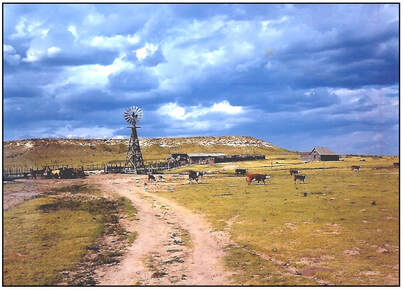 Crawford Ranch, 1899
Travelers between Dumas and Amarillo have watched the picturesque scene at the Crawford Ranch, 20 miles south of Dumas, continually change as the house and corrals crumbled and finally fell.

Over 120 years ago that house would have been a stopping place for travelers or a place for children in the area to attend school. A rutted trail led from the ranch south to the Canadian River and north to Dumas. The house served as a way station to travelers.

The ranch was homesteaded in 1899 by J. B. Crawford of Wilbarger County. J. M. "Bud" Crawford came in January of 1900 to fulfil the requirements of the homestead. He built a small wooden hut, perhaps 15 x 20 feet, that became the back section of the Crawford home.

The hut originally was not in its present location. An official survey a short time after the construction, showed it was on neighboring property. He moved it to its present location, a site protected from north winds by the long, low hill. Some ruins of the former location remain.

The corrals and barns were built just west of the dwelling with foundations dug into the foot of the hill.

The house was never painted. Crawford thought that paint kept wood from accepting moisture and drying out naturally.

Crawford returned to Wilbarger County and married Minerva Kincheloe and in January of 1901, the couple came to the ranch and the one-room house.

As the Crawford family grew, the house also grew. An addition was built on the east side of the first home for J. D. Crawford, a brother of "Bud". A third section , an upstairs with a steep staircase, was added later. The house had an "L" shape with a long room that was used for social events and dances.

Mrs. Crawford was postmistress of the post office "Aqua" which was located in the home. Bud carried mail from Dumas to Aqua, stopping to deliver mail at other post offices along the way. 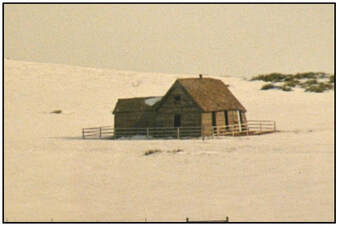 In an interview in the Moore County News Press in March of 1991, one of the daughters, Ruth Kempson, remembered the grass of early years being "lush and as high as a horse's back." Prairie chickens and other game thrived.

One evening, Mrs. Crawford thought she heard a woman scream and went outside to check, but found nothing. The next morning panther tracks were found around the windmill tank and a calf had been killed.

In the 1991 interview, Mrs. Kempson recalled, "The neighbors would stop, feed their horses and get a meal and all that was for free." Many strangers would spend the night with the family. The first time Crawford charged anybody was a stranger who showed up with a string of more than 20 horses. "He worried about it for weeks after because charging someone was something you just didn't do."

The Crawford Ranch survived the disastrous winter or 1918. "Dad had about 1,600 head of cattle going into the winter, and he had about 300 when it was over," Mrs. Kempson remembered.

The "Dirty Thirties" and the Depression brought the years of drought, dust storms, and wildfires. "Huge prairie fires would burn for days," Mrs. Kempson said. "My parents would go out to fight them and put us in the wagon on a clearing where the cattle had eaten back the grass. They would tell us 'If the prairie fire comes, get in the wagon and stay in the wagon'."

The dust storms would force the family to spend days in the cabin with doors and windows closed "while dust storms seemed intent on obliterating them."

"The chickens would go to bed it would get so dark," Mrs. Kempson remembered. She recalled one storm that struck so suddenly her father almost got lost trying to return to the house after shutting the windmill off, a distance of barely 100 yards.

The land remains as picturesque as it did in 1899. The house today has tumbled down, but still remains as a window to the past. A time where doors were never locked, food and lodging were always given to travelers and, according to Crawford's great grandson, Blair Kiser, "It's God's country. We're just here to look after it for a little while."
More Bits of History