The archives at Window on the Plains Museum contains an article from the June 8, 1972 Moore County News-Press concerning some "Official Arguments That Sometimes Got Warm."

Louis Dumas, founder of Dumas and an original member of the county commissioner's court, at one time found himself in the position of being filed on by his fellow commissioners. The unique complaint was for deliberately absenting himself from a meeting.

Apparently, the reason Dumas was missing was the intent to keep taxes from being set by the court. The complaint was filed in 1893 and indicated that Dumas' presence was needed in order to set tax values. The commissioners also acted as the county tax board.

Fellow commissioners felt that Dumas' absence was calculated to upset the taxing process, and so filed a complaint. No punishment was set and indications are that the difficulty was settled, probably by Dumas taking his place at the tax session.

Another unique complaint that probably has been used but few times in Texas, charged an early day Moore County judge with altering some records of the county commissioners court meeting. 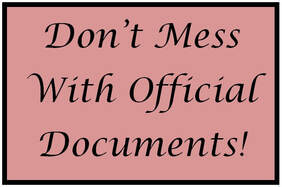 The charge was lodged by his fellow commissioners, with whom Judge Gouhenour had a disagreement over whether the judge could withdraw his signature from a certification he had made to a county treasurer's statement.

In an extended 4-day meeting of the commissioners that started on Feb. 9, 1903, the commissioners and the judge had examined and certified the statement of County Treasurer Arthur Nield as to the county's finances.

A few days later, Gouhenour decided that the treasurer's report was not made within Texas statutes and he made a request that his name be removed from the certification.

The commissioners disagreed and thereby set off a course of action that led to the judge being removed from his office and also being charged with a criminal offense, notably defacing an official record.

What the judge did was draw a line through his name in the commissioners court certification of Feb. 10, 1903. In a blank space beside his signature and that of the commissioners he drew a neat square and wrote in his reasons:
"I, R. P. Gouhenour, County Judge, having been refused a retraction of my endorsement of Co. Treasurer's report by Co. Comm. Have and now enter my protest against this report for quarter ending Jan. 31, 1903, as being untrue as to meeting the requirements of Art, 867 R. S. as amended and I hereby cancel my name by drawing a line through my signature this 23 of Feb. 1903. R. P. Gouhenour, Co. Judge."

The judge was surety on the bond required for Bob Powell as county clerk. Gouhenour filed a petition to be released from the bond. Mr. Powell immediately found new sureties.

The judge, however, didn't fare so well. His bond sureties, J. M. Terrell and H. A. Beauchamp withdrew from the judge's bond. Either the judge couldn't or wouldn't get new bondsmen and he may not have attended the next commissioner's meeting on May 9, 1903. Records of that session note that Commissioner A. L. Anderson was appointed to preside at the meeting "because of the inability of R. P. Gouhenour to act."

A Moore County grand jury, that had J. M. Terrell as foreman, indicted the ex-judge a few weeks later.

The indictment didn't mince words. It charged that the former judge did "maliciously and willfully change, alter, mutilate, deface and injure certain record book, to wit: vol. 1 of the Commissioners Court of Moore County."

Gouhenour asked for a change of venue and the case was transferred to Hartley County, where it ran out without any punitive action.

The judge sold out not long afterwards and left Moore County.

But he left his mark on Volume 1 of the Commissioners Court Records of Moore County.
More Bits of History