"Blast such a country." 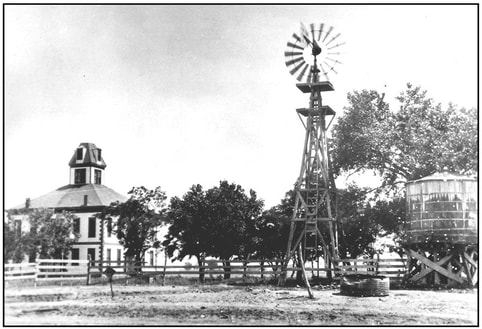 Dumas Town Square as the Clarks might have seen it
As they traveled into Colorado and found firewood scarce, they learned to use cow chips for campfires. William did not "relish the idea, but after our wood was gone and he had drank coffee and eaten ham and biscuits cooked by them, he took very kindly to picking up chips."

They traveled to the Pueblo area, then south into part of New Mexico. "We pulled through forty miles of sand in one stretch in Western Texas. It began on the east line of New Mexico and extended down the DCFW railroad where they found Channing. Channing was the best town we saw in Texas. I noticed a large building there built out of adobe bricks (mud mixed with straw and moulded into shape and dried in the sun) which carried the sign 'Channing Mercantile and Banking Company."

The travelers intent was to follow the Canadian River to the Red River, then turn north back to Ada. The Canadian River was running and had so much quicksand that it would have been impossible to find a crossing. They turned their course to the northeast. They had to pick their trail across very rough ground. Frank walked ahead, picking the trail, and was followed by William with the team and wagon. According to Frank, William had serious misgivings as to whether they would find their way out of Texas or not. Along the way, he was muttering, "By thunder, if we ever get out of here, by thunder!"

When they reached Dumas, Frank described the town as "consisting of the courthouse which is in very bad repair. The windows being shot out and the building being full of bullet holes where the cowboys hit when shooting at bats and sparrows. I was told by one of the natives that the boys did not mean anything by this: as they were only in fun and were just sort of tapering off from the good old days when they used to shoot the courthouse officials."

The courthouse was described as standing in a large pasture and with the double doors stood open, there was nothing to prevent cattle from going in and out at will. They were told it was not uncommon for the bottom floor to be filled with cattle in the winter.

He described the town as having "one dilapidated building in which the post office is kept. The postmaster keeps about one wagon load of general merchandise on hand to accommodate the general public. Beside these, there is a school house with the chimney knocked off and one windmill out of repair, three priveys, and one chicken coop made out of a store box. This is a complete list of everything in town."

When they left Dumas, they traveled to Hansford County where they found the courthouse and town buildings in better repair, then to Ochiltree County before coming to Englewood, Kansas, then north to Dodge City where they found a large camp meeting in progress. They were surrounded by a crowd of people who suggested that they might be preachers who came to help out with the meeting. Frank promptly denied the charge. He said, "The first time I visited Beloit, I was mistaken for a horse thief, but this is the first time I was ever suspected to being a preacher. In both cases, I plead not guilty and was honorably acquitted."

The traveling duo arrived back in Ada without further incident on the 18th of August, 1900.
More Bits of History