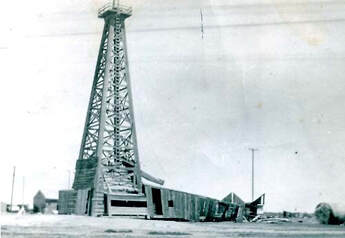 An important part of Dumas history observed its 90th birthday in 2019 and received no recognition even though it is a part of our everyday life.

In the 1920s, the oil boom had reached the Panhandle. Borger was becoming an oil boom town and oil had been discovered in Sherman County an in Moore County just 7 ½ miles east of Dumas.

Speculation was high that the same oil that ran through Hutchinson might be found in Moore County.

Dumas, at that time, had a population of 250 and Moore County had an estimated 800 people. The town was 35 years old and most of the original townsite lots were still unsold.

The townsite company engaged an energetic salesman, A. O. Duggan to handle sale of lots. The prospect of oil had stirred interest in Dumas, so Duggan developed an idea to promote the sale of lots. He would drill an oil well in Dumas. In addition, he would give new buyers of lots a share in the oil well. He offered quarter blocks for $500 and each would have a 6/1000th interest in 49 percent of the well.

He contracted with drillers, C E. Christie and George M. Rhoades, to drill the well for $24,483. The well was to be drilled on the southeast corner of the Townsite Company, East 14th and S. Maddox, the present location of the City Warehouses.

The project ran into bad luck, almost from the beginning. Early in the process, a string of tools was lost and Charlie Jameson, a local driller, worked for a time to fish for the tools. He spent 60 days on the retrieval project, delaying the actual drilling for the oil. According to present day gas department workers, some of the tools are still in the well.

The delay was the beginning of problems for Christie and Rhoades.

Interest in the city well was carried in area newspapers with reports of each stage of the drilling process. Duggan was running advertisements for the sale of the lots, trying to raise the needed capital for the drilling. By late July, he discontinued giving an interest in the well with the sale of lots, but instead lowered the price of a lot to $110. 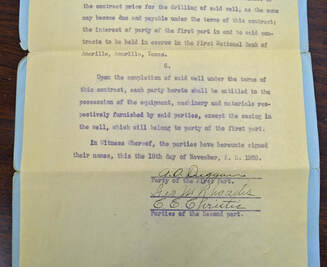 ​In September, Duggan realized he was running into financial trouble and renewed the interest in the well with the sale of lots.

On September 5, city-wide celebration was held to mark the discovery of gas, reportedly 5-million cu. ft. between the depths of 2, 985 and 3,030 feet. A week later, it was reported at 15-million cu. ft.

The town celebration included a barbecue, rodeo, dance, and a baseball game between Dumas and Stratford, which ended in a 6-6 tie.

In the weeks that followed, drilling continued searching for oil. Oil was not there, but the well had come in as a "gasser," assuring a natural gas supply with the 20-million feet of gas discovered.

With the prospect of oil gone, drilling ceased and suits were filed for unpaid bills. Christie and Rhoades sued under their contract and several Dumas firms who had supplied materials for the well filed claims.

One judgement was obtained giving possession of the well to F. A. Kingery or Denver, CO, apparently a financier who backed Christie and Rhoades.

The well was put up for sheriff's sale to satisfy creditors. By then, Dumas Utilities had tied on to the well and it was supplying gas to city residents. Noel McDade, Dumas mayor at the time, and W. J. Morton, a city commissioner entered the bidding for the well in November of 1927. According to McDade, "We figured to bid enough to guarantee that the well and pipe wouldn't be stripped for salvage and leave us without a gas supply." They went to $15,000, but the price went on to about $30,000.

Kingery bid it in the auction. A few months later, he sold it to Stanley Marsh of Amarillo who got all the liens removed.

The well was then sold in 1930 to Panhandle Power and Light in Borger, who ran lines and provided gas to Stratford and Boise City, OK. The Borger company operated it for several years, then in 1942, sold it and some other utility facilities to Southwestern Public Service. Later, SPS sold the well and some 12,723 feet of pipe to the City of Dumas for $23,700.

The search for oil, brought something much more valuable to Dumas -- gas. Only limited amounts of oil have been found throughout the county, but the huge gas lines running the throughout the county from the many gas wells in the county have resulted, not only in gas for city residents, but for Moore County industries.

There are 5,750 gas meters serving customers in Dumas today and the gas from the townsite well provides 15 to 20 percent of the needed gas supply. The remaining supply is supplemented by gas from West Texas Gas and El Paso Natural Gas.

The well that initially had a pressure of 250 pounds now works with a vacuum pressure. Plans being developed by the city are to convert the city fleet of vehicles to natural gas power using gas from the townsite well and the Morton well to power them.

Even though the well is not as strong as it initially was, the foresight of those who made the well possible had provided a major asset for the city of Dumas for over 90 years.