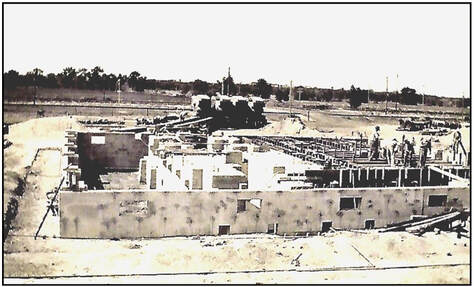 Construction of CIG
John Wesley Longstreth came to the Texas Panhandle from Pennsylvania in 1928 to supervise the construction of the Canadian River Gas Company Pumping Plant, 19 miles south of Dumas.

According to a family history by his daughter, Helen Longstreth Taggart of Amarillo, "Before he left Pennsylvania, he was told how lucky he was to be moving to Texas as it was warm all year. In that case, he figured he wouldn't need his winter clothes so he got rid of all them including his overcoat. When he arrived in Amarillo, it was winter and the cold winter was blowing. He found out in a hurry that the Pennsylvania folks didn't know what they were talking about regarding Texas weather. His first stop was downtown Amarillo at Fefermans' Army and Navy Store for "some good, warm work clothes."

After the plant was completed, Longstreth became Superintendent of Operations and moved his wife and seven children to the plant housing area.

The plant was named Colorado Interstate Gas Company. When it opened, it transported 6.7 million cubic feet of gas along a 20" pipeline that wen 426 miles from the Moore County location to Kit Carson, CO.

Colorado Interstate Gas Company, 1950's
CIG was a wholesaler of gas to be distributed to Colorado companies such as Public Services Co. of Colorado and the city of Colorado Springs.

The company built housing for its employees and a large hotel with a café was constructed for single employees.

Another large plant, Exell Helium, was built in the area and also had housing for its employees. A school, Bivins School, taught students through the eighth grade. A store with a post office provided shopping for residents and a Baptist church was constructed.

CIG used a several step process to separate pure gas from gasoline. Gas entered the plant through large 20" lines and passed through a scrubber to remove dirt and foreign particles. Then, was picked up by three huge 1000 hp. compressors and passed through coolers to reduce the temperature. It, then, went through another scrubber to take out any oil that may have gotten in from lubricating oil in the compressors. Several more steps of heating and cooling must take place before the pure natural gas can be sent north along the pipeline and the gasoline that was extracted would be loaded in tank cars and shipped to a blending plant in Amarillo to be used for gasoline for cars.

The plant was purchased in 2002 by Pioneer Resources and the large compressor buildings and cooling towers were dismantled. One of the Clark compressors, a large green unit, was donated to the museum and sits along the walking trail.

The plant is still operational, although the impressive large buildings are gone. The gas is still being pumped north to serve Colorado cities by present owners Scout Energy Partners.
More Bits of History