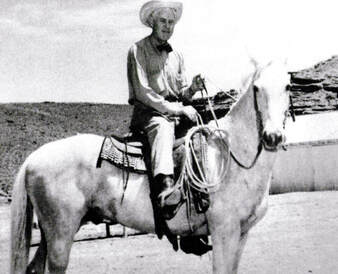 Sheriff Chester Logue
Chester Logue was one of about 20 cowboys working cattle on a round-up on the Beauchamp Ranch in 1927.

The cowboys started discussing who would run for sheriff in the upcoming election. In the discussion that went on for some time, "Mutt" Beauchamp suggested that Logue seek the office.

"It seemed preposterous at time, but everyone I talked to about it thought I'd make a good sheriff," Logue said in a 1975 newspaper interview.

In the spring primary election, Logue beat both of the other candidates without a runoff even though there were less than 500 voters in the county.

"The population was considerably more than that, but you had to pay a poll tax to vote and not many of the newcomers - mostly oilfield workers from Oklahoma - wanted to pay the tax," he pointed out.

According to the newspaper article, when Logue took office on Jan. 1, 1928, he became the youngest unmarried county sheriff in Texas. He claimed most of his problems were over prohibition, "...because I knew every bootlegger in the county."

He immediately set out to end the illegal sale of alcohol and it is told, he used a pair of binoculars and stood on top of the courthouse to find the bootlegging operations. One bootlegger was setting up for business when Logue arrived and shut him down - much to the bootlegger's surprise. He asked Logue how he found him so fast, and Logue told him about his use of the binoculars.

Logue recalled, "The days when crime in Moore County was less violent, but the 'Breaks" in south Moore County frequently produced a haul of illegal liquor during prohibition days."

"Prohibition is why I was elected to office," Logue said. "When it was finally over, so were most of my problems."