Charlie the Buffalo
By Glynda Pflug 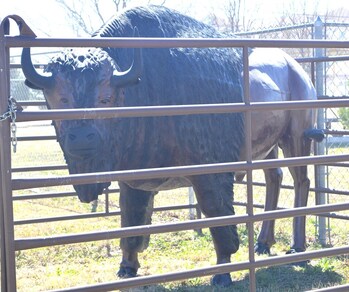 Charlie the Buffalo
In days past, buffalo roamed this area by the thousands. Today, Window on the Plains Museum has its own buffalo who stands as a sentinel watching a plains area that has no resemblance of the past. The buffalo was a gift of Jimmy and Joyce Wiseman who purchased the aluminum sculpture for their yard east of Dumas.

Jimmy thought the museum might enjoy having the sculpture for a short time, so he loaned it to the museum. Staff and volunteers began calling the buffalo "Charlie" and the name has remained. He is now "Charlie" and has become a permanent part of the museum. Jimmy even built a pen for him.

Charlie attracted so much attention -- even cars going down the highway would turn around to stop and see the sculpture. One day, the museum heard lots of activity outside and went out to investigate. A man had stopped his pickup to look at Charlie. His two dogs jumped out and, thinking Charlie was real, were jumping around and barking.

When it rains heavily, Charlie sometimes stands in water, but we are sure he enjoys the rain and the tall grass as much as we do!

We think Charlie is pretty special, but the white buffalo is the rarest. Indian tribes consider them sacred. Only one in every five million buffalo is a white one.

Earliest records of buffalo in Texas were by Cabeza de Vaca who spent eight years in Texas after being shipwrecked on the coast in 1528. He described the buffalo as having flat horns and resembling as Asian buffalo.

It was estimated in 1521, there were 60 billion buffalo roaming in Texas. By 1889, only 551 could be found alive. The greatest slaughter occurred in the 1870's when hunting parties would ride on flatbed railroad cars and kill buffalo from the train.

Small herds of buffalo can be found in state and national parks, a few in private collections with special permits, but the buffalo no longer roam the plains.

We are proud to have "Charlie" as a tribute to times past.

Compiled from:
Archives at Window on the Plains Museum
"The Tomlinson Lone Star Book of Texas Records", pub. 19
More Bits of History