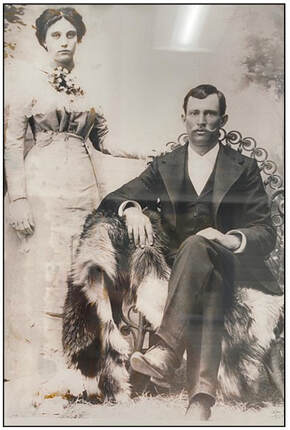 Charley and Florence Jones on their wedding day, March 1, 1899.
Charley Rager Jones was living in Greer County, Oklahoma, and ranching on a quarter section of land when he met Florence Jessie Burrow. She was living with the Bob Payne family and Charley was helping with threshing on the Payne farm.

Her fluffy white biscuits were served to the threshing crew and Charley decided that any girl who could make biscuits like that deserved to be his wife. They were married on March 1, 1899.

They became parents of twins, but both died within a few hours of birth. They couple decided to sell their land and move to Moore County in 1901.

Charley combined his herd of cattle with Gus Gober's herd and they drove the herd of about 1800 cattle to Moore County. Gober's destination was the Gober Ranch located about fifteen miles east of the townsite of Dumas. After the drive, Charley worked as a cowhand on the Gober ranch for about six months.

Charley traded about 25 of his cattle to Charles Clements for four sections of land, sections 170, 172, 164, and 166. Charley and Florence chose to build their home on section 170. It was a two-room half-dugout on the north bank of the South Palo Duro Creek.

Supplies were freighted by wagons from Channing, about 40 miles, sometimes from Dalhart.

Two sons were born to the couple while they were living in the dugout. Charley Albert was born January 4, 1902. Dr. Cushman who lived east of Dumas attended the birth. Edgar Albert was born March 19, 1904.

In 1909, Charley built a four-room wood frame house near the dugout. In 1913, they bought their first car, a Buick -- the first Buick in Moore County.

In an article, Edgar wrote in 1922, he remembered the winter of 1918. "It was during World War I. There were only three of us going to Phythian school. I was 14 years old. The other students were H. B. Phythian age 15, and his brother, John, age 13. Our teacher was Miss Jewel Foster. Miss Jewel was a very strict teacher."

Edgar recalled that Albert was taken out of school to help his dad. The two boys had always gone to school together. Charley started school when he was four years old so Albert wouldn't have to ride to school alone. The two boys rode to school in a buggy with the teacher, Miss Salley Jackson, who lived with them.

Edgar remembered an incident in 1912 at the Phythian school. A burro that one of the boys had ridden to school got out of the pen during recess. "We boys all took off after it to catch it. Miss Lucille Whitlow was our teacher. She was so pretty and knew it. She was a strict teacher. Because we did not ask her permission to catch the burro, she got a bull whip after us to get back inside the school yard. She chased us a hundred yards or so out in the pasture where we were chasing the burro, popping that bull whip after us. Most of the boys could keep well out of range but sometimes the whip nipped me and I'd speed up. I was about seven years old."

By the time Albert was ready for high school, Dumas had built a high school. He drive in the families' Chandler automobile to attend classes. Roads were ungraded, little more than wagon trails, and the school, like others of the earlier 1900's, had no indoor plumbing or electricity. There was not a graduation in 1920, " Albert recalled. "They ran out of money and the teachers all quit. They never gave us our grades."

Edgar recalled a trip the family made to Quanah and got caught in a snow storm. They spent the night in Amarillo and started home to Dumas the next day. W. J. Morton was also trying to get home, so the two families worked together to break the crusts of snow. The families drove all day and got to Dumas about sundown.

Edgar and his wife, Bernice, moved to Truscott, TX.

Charlotte married Plasco Moore and they made their home in Quanah.

Rger stayed on the family ranch here in Moore County. He died January 2, 1994.

Willie Ruth was thrown from a horse and died in 1931.