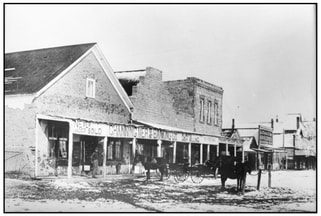 Channing Merchantile
Neighboring county, Hartley, has a history somewhat different than Moore County. It is built around the railroad and two of the towns that grew because of the railroad. The county was named for two brothers, Oliver C. and Rufus K. Hartley. The county began organizing in 1891 when W. D. Twichell laid out the Channing townsite.

The Fort Worth and Denver Railroad acquired a right-away through the county in 1888. It passed through Channing and when the line reached the point where Hartley is now, a switch was put in. A tent city and several saloons grew for railroad workers and cowboys. The railroad agent even lived in a tent. For a while, he maintained an outdoor desk and left it unlocked at night. Sometime there would be as much as $500 in the desk drawer, but no one ever touched the money.

The railroad had missed the famous town of Tascosa and many of the residents there were moving to Channing or Hartley.

Channing became a commercial center and served people for as far away as 145 miles. The town was first named Rivers for Geore Channing Rivers, a paymaster for the railroad, but another town in Texas had that name, so it was decided to use the name Channing.

A. G. Boyce, manager of the XIT Ranch which headquartered in Channing, and C. E. Oaks organized the Channing Mercantile and Banking Company. At one time the bank had five clerks, two draymen (wagon drivers), a manager and a bookkeeper.

In Hartley, William Andrews was awarded a contract to build a courthouse on a $200 lot. The building was to be 24' x 40' and to be completed in 30 days. Three months later, it was still not finished.

The two towns were growing rapidly. Channing was slightly ahead of Hartley.

A dispute arose over which town should be county seat. Hartley was nearer the center of the county. Channing maintained it was the trade center. Two elections were held, one in November of 1896 and one in May of 1903. XIT cowboys went to Hartley and moved the original frame courthouse by using wheels under the building. In 1906, a brick building was constructed in Channing and the frame building was converted to the famous Rivers Hotel. A fire swept through the business district on September 6, 1931 and destroyed seven buildings including Rivers Hotel.

Early history of the area shows that Indians, probably Kiowa and Comanche, used the area for summer hunting grounds. Spaniards came through in the early 1600's and later Comancheros became established in the area.

An article in the Amarillo Globe News on August 28, 1995, tells of sheepherders who were established along the Canadian River. "The Panhandle could be been known as a sheep producing region rather than cattle country." Casimiro Romero was a Castilian Spaniard who owned 6000 sheep. He came to Texas in 1876. He and other sheepherders built haciendas and plazas along the Canadian River. Charles Goodnight made a pact with Romero in 1876 to respect the rights of the sheepherders to raise sheep in the region. Eventually, cattle crowded out the sheep and Romero went back to Mexico in 1897."

XIT official, J. B. Farwell, was "committed to Christianity and opposed saloons, prostitution, gambling, swearing, drinking, wasting time, shotting and not going to church." The ranch had 23 Ranch Rules for Cowboys that were specifically addressed to a man's character. "It is the aim of the owners of this ranch to conduct it on the principles of right and justice to everyone; and for it to be excelled by no other -- good behavior, sterling honesty and generally good character of its employees."

The rules included:
Mr. Boyce also introduced a policy that "six days were enough in every seven for man or beast to work and that hereafter the XIT would observe Sunday."

The XIT Ranch was created from 3 million acres that stretched from near Lubbock northward to the Oklahoma Panhandle. Construction of the Texas State capital building was part of the deal. The capital building is the largest capital building in the United States. The XIT ranch was liquidated in 1911.
More Bits of History