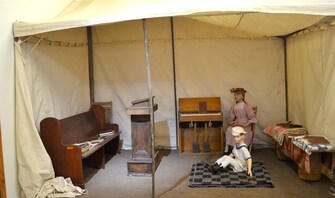 In the early 1900's, camp meetings were held by traveling preachers. Sometimes they were held under a grove of trees, sometimes just in the open, and occasionally, they would be in a large tent, if the preacher had one.

An exhibit at Window on the Plains is a display of a camp meeting. One of the items in the exhibit is a pew that came from the Middlewell Methodist Church, originally it was used in the Hartley church.

In 1949, the Presbyterian Church in Dumas purchased a military chapel that was used at the Air Force Base in Amarillo. When it was moved to Dumas, a military field organ was in the chapel. The church loaned the organ to the museum for the display.

Other items inthe exhibit are Bibles, songbooks and a pulpit. A heavy quilt from the Marshall Cator estate is on the ground for a child to sit on.

Circuit preachers traveling from settlement to settlement were the beginning of churches in the Panhandle.

One of the early circuit riders in the Panhandle was a Methodist preacher, W. B. McKeown.

At a Methodist Conference in Georgetown in November of 1900, Bishop Candler who was head of the conference, read the list of preachers and their appointments.

According to accounts written by McKeown for The Southwestern Advocate in 1935, he remembers his reaction when the appointment was announced. "The words brought to me a crushing sense of insufficiency, not to say despair. But a still small voice with whispered, 'Lo, I am with you' and I began to look hopefully toward my new field of labor."

He received many "warm handclasps" from other preachers as they bade the new "foreign" missionary goodbye. Several had words of encouragement, "I say, Mac, you had better get two good six-shooters before you leave for that wild new country!" was the advice of one.

"How strange, I meditated, as I sped along my journey to Channing, a distance of more than six hundred miles; an appointment with no church, nno Sunday school, no league, no missionary society, no parsonage, and not a dollar's worth of church property. A gloomy outlook? Rather, but how refreshing the thought that there was no church debt to be paid off!"

McKeown's assignment was to serve the Panhandle area north of the Canadian River. He chose to begin his ministry in Moore, Sherman, Hansford and Ochiltree counties. Once he had established a home for his family in Channing, he began his plan for the circuits he would travel.

He had been urged to wait until spring to begin his travels. Col. A. G. Boyce, superintendent of the XIT ranch, said that such an attempt should be extremely hazardous, adding with emphasis: "I have known even cowboys to freeze to death in a sudden blizzard, well as they knew the range, and it just won't do for you, a stranger to this country, to travel over these treacherous plains at this time of year."

McKeown's desire was to begin the task of ministering to those who lived in the area, so he began to prepare for his journeys. He replaced the "dilapidated leather top of his buggy that had already seen five years of service with a new home-made one of heavy oil cloth, also curtains of the same material, the old leather being carefully tacked over the floor of the under carpet. The buggy was also equipped with a warm lap robe, a pair of very heavy blankets, an oilcloth cover over all these, and a dash board lantern which was to be used for either light in night travel, or for heat under the lap robe as might require."

"Having taken the dress of the freighter of that country as a model, my traveling outfit included arctic overshoes, woolen shirts, an extra overcoat for rain and wind, a fur cap, warm gloves and heavy driving mitts."

"Having donned my new garb, I was ready for my initial journey in the early afternoon of a bright day in December, the Avery ranch home in Moore County forty miles distant, being my desired haven for the night."

"The town of Dumas consisted of a courthouse, a school house, and an abandoned hotel. In the hotel, I met the entire population of the town, a Mr. Neild, who had his living quarters, his stock of goods and the post office all in the building."

Neild gave instructions on how to find the Avery home, and McKeown continued his journey. As darkness came, he stopped to light his lantern, only to find he had no matches. He followed fence lines until he was "soon in front of a dark and silent house. Repeated knocking at doors and even calling aloud brought now response; there was no sign of life."

After putting the horses in the corral, he returned to the house to knock again. Still no answer. He found the back door unlocked and decided to enter. He made a pallet of his buggy wraps and laid down.

As he lay there, his thoughts recalled "pioneer preachers of other days who slept on the mountain side, in groves, and even in hollow logs, but not one who had broken into a house and made his bed."

He was awaken when Mr. and Mrs. Avery returned from fighting a prairie fire. They welcomed him and gave him a good bed for the remainder of the night. When he left early the following morning, they added a box of matches to his equipment.

Everywhere those sturdy pioneers welcomed the preacher as an asset. According to McKeown, "He was needed not alone to preach the gospel but to bury the dead and marry the insane."

During the time McKeown served as a missionary in the "Coldwater Mission", "I gladly used everything available -- ranch houses, dugouts, courthouses, a few school houses scattered through the country and sometimes simply the out-of-doors. My school house appointments included two in Moore County, one at Dumas and the other on Blue Creek on the Trumbul Ranch; two in Hansford, Rifle Pit on the Curtis Ranch, and Zulu in the southern part of the county; and one in Ochiltree on Wolf Creek. To these I found my way over the roadless plains by means of a pocket compass -- my constant companion travel."

In 1902, the Methodist conference divided the Panhandle area and James Winfred Hunt became the first pastor of the new charge of Moore and Hutchinson counties. The circuit preacher had done what he needed and established churches in those counties that would now be served by a pastor.

Compiled from:
Archives at Window on the Plains Museum
Articles in The Southwestern Advocate, March and April of 1935
Letters from W. B. McKeown to Mrs. Julius Weidling, February 1941
"A History of Methodism in Dumas, Texas" by Gladys Carroll
Moore County News Press, January 1991
​100 Moore Years