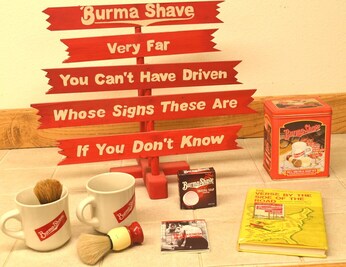 One of the "little" treasures at Window on the Plains Museum is a part of the Barber Shop display, donated to the museum by Jackie Funk and Mike Funk.

It's a little yellow book called "The Verse By the Side of the Road" written by the grandson of the man who started making the famous Burma Shave.

The story begins in the 1920's and tells about Leonard Odell, an attorney in Minneapolis. According to the author, Frank Rowsome, Jr., "In those times lawyers were short on education and long on enterprise, and Grandfather had both of these attributes."

Odell was a U.S. Marshall for a time with the duty of apprehending men who sold liquor to the Indians. He also manufactured a liniment in his law office. "Lawyers were into all kinds of things then, because in those days law practice wasn't as fruitful as it is now."

He claimed he got the liniment recipe from an old sea captain, who traveled the world and learned from witch doctors that he encountered.

Odell's law office was on the fifth floor of the Globe Building and when he was mixing the liniment, the smell filled the entire building. He was selling his liniment through a couple of drug stores in Minnieapolis.

Rowsome writes, "The family all had this liniment in their homes. I had an aunt who was burned severely on the hand with hot fat. In desperation, she stuck her hand into this liniment and in spite of what you might think, the pain stopped immediately. She had no blisters and no scars. It was a marvelous thing."

Rowsome's father, Clinton, became involved in the liniment business after Odell had a stroke and was confined to his home. He set out to market the liniment and named it Burma Vita. The author says, "Well, we sure starved to death on that product for a couple of years. With a liniment you have to catch a customer who isn't feeling well and then you only sell him once in a while."

So, the family decided to find a more marketable product. They worked with a chemist, Carl Noren, and developed Batch Number One of Burma Shave, a brush shaving cream. "It was frankly pretty terrible stuff. It was not until we got to Batch Number Forty-Three that we came up with a good, stable product."

Another of Odell's sons, Allan, became involved in marketing the product and one day he was driving and saw a small series of signs advertising a gas station.

Some of the big advertising men in Minneapolis told Clinton and Allan that it would never work, but they took two hundred dollars and started the advertising that would become famous.

"We bought second-hand boards, cut them into thirty-six inch lengths and painted them. They were pretty crude." They started with ten or twelve signs along two roads near Minneapolis."

By the beginning of 1926, the company was getting repeat orders and they set up a sign shop. It was Rowland's job to install the signs along the roads. They decided there was not enough road traffic in New Mexico, Arizona, and Nevada, so signs were not erected in those states. No signs were placed in Massachusetts because of high land rental fees. Over 7,000 sets of signs were erected in 43 states.

The two brothers, Clinton and Allan, thought up the jingles, each ending in "Burma Shave." They began sponsoring contests for new rhymes, paying $100 for winning entries.

One of the most memorable Burma Shave stories came from this jingle: "Free - Free, A Trip to Mars for 900 Empty Jars. Burma Shave." Arliss French, a grocery store manager in Wisconsin saw the jingle and decided to take Odell up on the offer. French and his wife arrived in Minneapolis dressing in full space attire with 900 empty Burma Shave jars. Known as a man who delivered on his promise, Odell sent the couple on a trip to Moers, Germany (pronounced Mars). The resulting publicity was tremendous.

On February 7, 1963, it was announced that the Burma-Vista Company and his famous Burma Shave had been sold to Philip Morris, Inc. It would be a division of American Safety Razor Products. The road signs were gradually reduced and replaced with other advertising. So, trucks were sent out to retrieve the signs and posts so nothing would remain.

One of the signs was given to the Smithsonian in Washington. The Odells chose their favorite:
Your Head Grows Bald
But Not Your Chin
Burma Shave

The book, "The Verse By the Side of Road" has a list of jingles used by the company, listed by year, from 1927 to 1963.
One of the first signs was:
Shave the modern way
No brush
No lather
No rub-in
Big Tube 35 cent
Drug Stores
Burma Shave

In 1963, the signs were shorter:
Every Day
We Do Our Part
To Make Your Face
A Work of Art
Burma Shave

The Chick He Wed
Let Out a Whoop
Felt His Chin and
Flew the Coop.
Burma Shave

The liniment company that started in a small office on the fifth floor of an office building grew into on the of the best known companies in America with an advertising idea that "made everybody happy."
More Bits of History