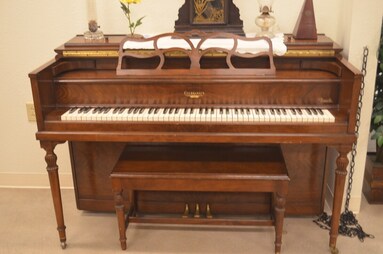 A piano that is displayed in the entertainment area of the Family Life Center at Window on the Plains Museum has a history that is tied to one of the early settlers of Moore County.

The piano is a Gulbransen brand and belonged to Kitty Crump Brady, daughter of R. L. "Boss" and Guy Crump.

Crump was born in Georgia where his family had large farming interests, cotton mills, saw mills, and flour mills.

At age 18, Crump with three boy companions, decided to come to Texas. They landed at Rockwall on January 7, 1891. The following summer, he did farm work and in the fall, operated a cotton gin at Rockwall. From there, he stopped briefly in Henrietta, Texas, in Clay County and worked on a ranch. Then, was hired to boss a trail drive to Moore County which led him to be called "Boss" for the rest of his life.

He rode the open range on some of the large Panhandle ranches of that day. His first employment was on the S. H. Zinn Ranch. At that time, there was hardly a fence in the entire Panhandle. He worked on the Coon Ranch, then later on the XL Ranch as a freighter where he drove freight teams, each compromising from ten to eighteen mules and earned the name "Kid Mule Skinner." He also worked as a cattle puncher on the LIT Ranch and then spent another three years on the XL. He was an early employee of the Fort Worth and Denver Railroad loading cattle to be shipped to markets in the east.

"Boss" met Guy Edwina Scott when she came to Moore County to visit an aunt, Mrs. J. H. Phillips. They were married in 1905. Their daughter Kitty was their only child.

Many colorful stories are told about "Boss." When plans were being made to organize the county, "Boss" was credited in bringing in cowboys to vote from over the area with "light regard for residency requirements." When the election was one vote short of passing, "Boss" convinced two cowboys to vote again so the county could be organized. Records show that only 50 eligible voters lived in the county at the time of the election. He assisted in building the first courthouse.

"Boss" and a friend "Ick" Reed owned a palomino named Sandy that was kept on a lot at the corner of 19th and Dumas Avenue. The horse became a legend in Moore County and a replica of Sandy stands outside the McDonald's Restaurant at that corner. "Boss" rode at the head of the Dogie Day parades for more than half a century. The later part of that time he was on Sandy.

1937 Packard 120 Touring Sedan
The couple enjoyed traveling and visited every state and many foreign countries. The Crumps lived at 1124 S. Dumas Ave. After "Boss" died in January of 1959, Guy spent much of her time in Amarillo with her daughter and the house on Dumas Avenue stood empty for many years. Guy died November of 1971. The house had been left much like the Crumps used it. Furnishings were still in the house and a 1937 Packard 120 Touring Sedan remained in the garage. The Packard was a familiar sight around the county, always with a large dog sitting on a blanket in the passenger seat.

The house is gone now and a car wash stands on the lot, but stories of early history as told by "Boss" remain. He was the one who could remember Oscar MacDowell coming here in 1894, and Wiley Fox arriving in 1898 and how Charlie Jameson got caught in a snow that year and stayed. He told of the Sneeds arriving in 1904 and Lew Haile in 1908.

The 1937 Packard has a new owner and has been restored to its original grandure.