Bose Family and their Outhouse
By Glynda Pflug 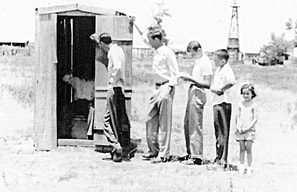 The love of the land was evident in the Howard and Wendell Bose family. It started back in Germany with their grandmother, Anna Marie, who moved to Russia from Germany to find land. In 1891, she and her husband were aboard the SS Dania headed for New York. They travel from New York to Kansas, then to Oklahoma where they found farm land along the Washita River. Anna Marie's husband was killed by cattle rustlers and she possibly would have gone back to Germany if she had been able. She married John Bose in September of 1896. Her search for land and a home eventually led her sons, the Bose Brothers, to the Middlewell Community in Moore County.

In November of 1930, three Bose brothers, Ed, Carl and John, came to Moore County looking for land to farm.

The brothers had been farming in Oklahoma near the town of Cooperton. When the Great Depression hit, the owner of the land decided he could no longer afford "the luxury of having it farmed for him." He began farming the land himself and the Bose Brothers began looking for land.

They found the land they wanted in the Middlewell Community and became "suitcase farmers." Families of the men remained in Oklahoma and the brothers worked the land in Moore County during farming season, commuting the 200 miles back home during "off"season.

"There was always work to do growing up on the farm," according to Howard, son of Carl and Hilda Bose. "We milked cows, fed chickens, picked cotton and worked in the wheat fields."

"On Sunday afternoons, we often played cow pasture softball and on rainy days played in the hayloft in the barn. Sometimes we had private rodeos with kids from the community, but the animals would get so tame they refused to run."

"We had more time to do things as a family. Life was a lot simpler than it is today. Everyday pressure didn't influence our lives," relates Howard in an interview in the May 13, 1979, edition of The Moore County News-Press.

Howard and his wife, Evelyn, were the first to make their home in Moore County, coming in 1954. They were followed by Wendell and his wife, Lois, a couple of years later. Both Howard and Evelyn were teachers in Dumas schools. Howard taught English, Latin, auto mechanics and was director of Vocational Education. Evelyn taught home economics at the junior high.

Parents Carl and Hilda moved to Moore County in 1961.

Several items from the Bose farms were donated to the Museum by Howard and Evelyn.

Probably, the most unusual is the little outhouse near the museum barn. Outhouses were used before there were septic or sewer systems. Outhouses were referred to by several names - "the john," "main office," "throne room," or simply "toilet."

The base of the outhouse at the museum was developed and manufactured by the Works Progress Administration or WPA. The WPA program was created during the administration of Franklin Roosevelt as part of the "New Deal" to help end the Great Depression. The base for the museum outhouse is marked as being made by the WPA.

The concrete outhouse base was designed to be fly proof. It had a lid and a screened vent. Lime was used as a germ killer and deodorant.

Sometimes unwanted guests appeared, such as yellow jackets and scorpions. The outhouse from the Bose farm had rattlesnakes as guests on two occasions.

This particular unit was considered the "cadillac" toilet of its time. It was sold new for $3 including the seat in 1934. It was retired from the Carl Bose farm in the late 1940's.

Howard and Evelyn have been generous in sharing their family history with the museum. They have donated many household items, including a beautiful silver punch bowl and coffee service set, a sewing machine, a Maytag washing machine, linens and vintage clothing, just to name a few.

Evelyn donated a 1941 International Harvester Farmal Model H tractor that belonged to her father. Two of the tractors donated by Howard, were used by his father during most of his farming career - a 1938 Cletrac tractor (displayed in front of the museum, near the sign) and a 1939 Model D-Z Caterpillar tractor which was bought new in Oklahoma.

Howard was recognized for his contribution to Moore County and to the Dumas schools. He was named Farmer/Rancher of the Year by the Chamber of Commerce in 2014 and was inducted into the DHS Hall of Fame in 2014.

Howard and Evelyn haved moved from Moore County, but return periodically. The love for the land and Moore County keeps bringing them back!

Compiled from articles in the archives at Window on the Plains Museum
And a May 13, 1979, edition of The News-Press