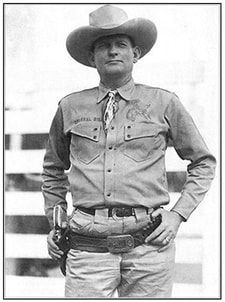 Texas Ranger, William Sterling
The oil boom of the late 1920's brought problems to neighboring Borger and to Moore County.

Roughnecks coming to Borger to work in the oil fields brought with them gambling houses and lawlessness. They city saw a population increase of more than 40,000 in three months and a corrupt city government allowed prostitutes, card sharks and bootleggers to conduct business.

In a book written by Texas Ranger William Sterling, who headed the Rangers on the Borger project, "The promoter of the town, who named it after himself, laid out the townsite, bringing all new people with him. He even brought his own doctors and undertakers, the latter being paid $100 for interring paupers." It was claimed they would knock a drunk man in the head and then bury him for the fee.  Borger became known as home of the biggest assortment of criminals who ever congregated in an oil field.

Several Amarillo friends of Texas Governor Dan Moody went to Austin to talk to him about the conditions existing in Borger. Moody sent Boyd Gatewood, his private secretary, to Borger to make an on-the-ground survey. While the report was being studied, three officers were killed in three days. Moody decided it was time to use the Rangers to clean up the "wildest boom town in history." Sterling arrived in Hutchinson County and with a team of ten other Rangers brought the town under control, arresting 124 men within the first day. Crooks started leaving Borger and were strung out along the highways in droves, some in cars and trucks, other afoot. Some of those headed just across the county line into Moore County and started the town of Belle Plains. Outbound trains were doing an abundance of business. Lawbreakers were shackled awaiting removal to the county seat, Stinnett, for trial. They issued warnings to 1,200 prostitutes to leave town or face arrest. 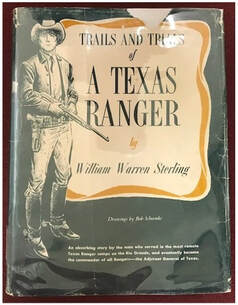 According to Sterling, "The numerous slot machines we seized were taken to a vacant lot near the police station where they were destroyed by blows from axes or sledge hammers."

"The liquor traffic was broken up, many stills being seized and destroyed and several thousand gallons of whiskey captured and poured out. 203 gambling slot machines were seized and destroyed," Brig. Gen. Robert Robertson, the Adjutant General of Texas at the time. "As a result of the demand on part of the citizens of Borger for administration of the law, the mayor, city commissioners and chief of police resigned, replaced by citizens pledged to uphold the laws."

Sterling's book, Trails and Trials of a Texas Ranger, tells of the arrest of the "king bootlegger of the Borger district. He had an immense whiskey still across Bugbee Canyon in Moore County."

A raid on the bootlegger's still netted its owner, all his paraphernalia and supplies. Sterling brought his suspect to Dumas to file criminal charges in 69th District Court and jail him. The case was filed on December 22, 1931. He was charged with the "alleged possession for the purpose of sale of spirit liquor capable of producing intoxication."

That's when problems began. The present Moore County jail in the 49-year old courthouse had not been completed.

Since there were no adequate county jail facilities, Sterling started looking to a jail in the northern Texas Panhandle to house his prisoner.

"We took our man to Sherman County and found it had no adequate jail," wrote Sterling in his book. "The same was true of Hartley County. We finally landed him in the Dallam County jail at Dalhart."

Records in the 69th district court show that the case against the man was called for trial on September 21, 1932, but the defendant failed to appear. His bond of $1,000 (a considerable amount in the Great Depression days) was forfeited and later dismissed.

Sterling rose through the ranks of the Rangers and became Adjutant General of Texas, head of the Texas Rangers.

Compiled from: a News-Press story dated October 2, 1980
"Trail and Trials of a Texas Ranger" by William Sterling
More Bits of History