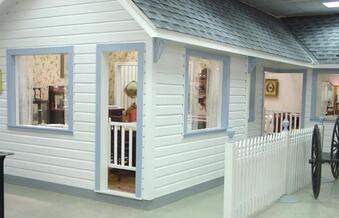 1920's Blue House
Many years of experience by a master carpenter helped create a replica of an early 1920's family home, a major display in Window on the Plains.

Leading the construction was Vic Lewis, a very experienced carpenter, who had previously helped design and construct the ranch house and street scene exhibits at the museum. We call it "the blue house" because it has a blue roof and the time is painted blue.

The floor of the house came from the ballroom at the Lew Haile Annex where the museum had its beginning. When it came time to tear down the Annex, the museum board asked for permission to save the wood floor that was in the ballroom.

Volunteers gathered with skill saws and cut the floor into movable sections and preserved it for future use. The 1920's house had not even been thought of at the time.

The idea began when Jimmy and Joyce Wiseman offered a large oak dining table and matching buffet. About the same time Eddie and Carolyn Stallwitz offered a bird's eye maple bedroom suite that had belonged to Carolyn's mother, Lucille Husbands.

Museum staff decided that in order to display them properly, they needed to be in a house.

Vic took the challenge as he had all the others the museum pitched at him. He built us a house!

The inside of the house needed to be decorated like a house of that era, so the museum asked help from Ethel Barnes. She had experience as a decorator and knew how it should be decorated. In the 1920's, walls were wallpapered, not painted. She picked out the patterns for each of the three rooms. 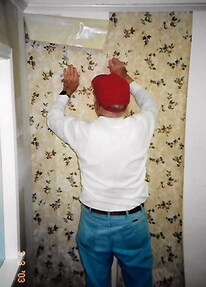 Kenneth Fagan
Kenneth Fagan, who worked in construction, was asked to hang the wallpaper and he agreed. The house was beginning to look like a real house!

The furniture was moved in, curtains were hung at the windows, the bed was made up and clothing was put in the armoire.

There was a problem! The parlor (or living room) in the center of the house was empty. The museum did not have any parlor type furniture in the collection. We explained our problem in a newspaper story and had an offer of a couch. Trent and Amy Seagler had a perfect couch stored in a building at their home and offered it to the museum. A little while later, Ken Schmidtman of Amarillo offered a small organ and it fit perfectly! The table in front of the large window is covered with a red velvet and gold trim cloth made by Stephanie Smith.

The corner of the dining room features a china etagere from the Jessie Glynn Burnett estate. It displays some of her crystal. The table is set with china that was hand painted by Lucille Husbands. The linens are fro the Marshall Cator Estate.

The teacart was a donation of Mary Lewis Griffin and some of the items on the cart were from her sister, Martha Crabb.

The dining room holds items from 22 different donors, the parlor has items from 21 donors and the bedroom items come from 34 donors.

It took a vision and a lot of donors to make the 1920's house a reality.