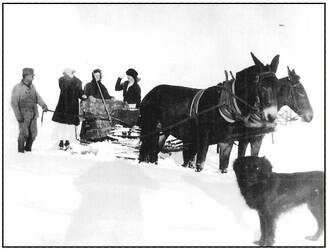 One of the worst Panhandle blizzards came in February of 1948 and is related in the The Windswept Land by Myrna Thomas. The account was taken from The San Antonio Express on February 13, 1948, and retold by Mrs. Roy Carroll.

"Robert O. Reynolds, his children and his mother-in-law, Mrs. Booker Toon, had driven from their home on the Pronger Brothers ranch near Stratford to the Cactus Ordnance Works hospital, north of Dumas, to Mrs. Reynolds and the youngest Reynolds child, four days old.

When they left Cactus for home, the temperature was about three degrees below zero. Snow was being whipped at winds of 40-miles per hour and was intermingled with sleet. Their car hit a snowdrift about eight miles south of Stratford and stalled. When the gasoline ran out, the car's heater stopped."

Reynolds, seeking assistance, walked about a mile to the Sam Wohlford farm and told his story to Mr. Wohlford.

Wohlford got a tractor and started to the stalled car. Mr. Reynolds stayed at the house as he was suffering from exposure.

The story continues, "the stalled car was found, but Mr. Wohlford was unable to tow the car. He took boards that he carried on the tractor, and working in the blizzard, made a sled. He put the grandmother and three children on the sled and towed it back to his farmhouse.

One child, Robert Wayne, died on the sled during the trip. Wohlford knew that the grandmother and the little girl, Juanita, were in critical shape and decided to go for help. He had trouble navigating the tractor so he started to walk the six miles to Stratford. He was within site of town when he came to a draw filled with snow and unable to cross.

At 4 a.m. after more than nine hours walking through the blizzard, he came to the farm home of Dick Farris. He still had enough endurance to press the rescue. In a truck they drove to the Cactus Ordnance Plant where a party was organized and they made their way to Wohlford's home. Sometime during the night, the grandmother and Juanita had died. The father and one young child were still alive."

Blizzards were not uncommon to the Panhandle area. One on record from 1918 was remembered by Miss Jewell Foster who lived six miles east of Dumas with her parents, Mr. and Mrs. W. R. Foster.

According to Miss Foster, "the snow lay on the ground until almost April. It had started the middle of December, 1918." 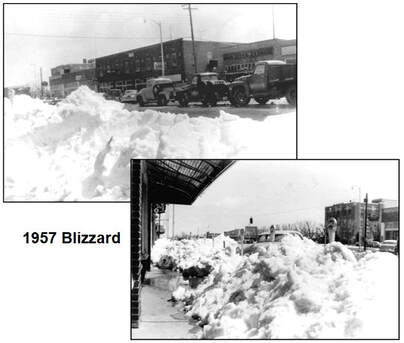 Fences were covered in places and drifts reached low edges of barns and sheds. Cattle drifted, starved, froze, and died in piles during the blinding storm.

Frequently ranchers from the east part of Moore County made the long difficult trip to Hartley for cotton-seed cake. Only ten sacks could be hauled on the small wooden, homemade sleds which were pulled by four to six horses or mules.

Freighters planned to reach the Foster place where they could get food, a good night's rest and room for their teams. Sometimes herds of cattle were held overnight in the corrals or guarded near the feed lots.

On one such occasion one thousand cattle milled about the place all night. With the light of the following day, the boys and hired hands saw long hours of labor in the cold destroyed. The cattle had devoured all but the largest sticks of a huge pile of wood cut from the nearby locust grove. This wood was to substitute for coal which could not be hauled through the deep snow.

Ezelle Fox remembered walking to school with the wind blowing and feet sinking deep in the snow. "The old pot-bellied stove may have been ugly but to a school boy coming inside it was a pretty sight!"

Hattie Byrd Ponder had 8 miles to go to school. She left before daylight and got home after dark. When there was snow, she used a sled drawn by a horse, otherwise she went in a 2-wheel cart with lots of quilts wrapped around her.