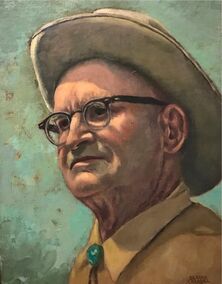 Charlie Bennett
Little stories can tell a lot about history. In the book, The Windswept Land, a couple of events in the W. F. Bennett family tell about life that was much different than it is today. The stories were told by two of the Bennett children, Verna Bennett Swaggert and Charlie Bennett.

The Bennett story began in the fall of 1893 when W. F. came to Moore County and bought a section of land. He returned to Colorado, but started for Dumas in the spring of 1894 with his family. The family came from Longmont, Colorado with a covered wagon, a single buggy and 30-40 head of cattle and horses, reaching Dumas in early June. At the first sight of the little town, Ray the youngest boy who was about six years old at the time, commented, "Dad, if all those houses were bunched together, it might be a town, but not scattered around like that."

One of the daughters remembered, "I don't think I ever saw a prettier country than this when driving into Dumas. It had been raining and the grass was high and pretty. The level prairies were all blooming with wild flowers."

"One cold night in 1895, we heard a knock on the door and when we opened the door there stood an Indian. He had come a long way on horseback and was hungry and cold. He put his horse in the shed and we fixed him something to eat. He spoke English and said he was a guide and was going to some reservation to guide some tribe back to another place."

Another Bennett story tells of an older sister teaching school at Old Mobeetie.  Mr. and Mrs. Bennett and part of the children went to see her, but left two children home "to hold down the place" while they were away. According to the story, "Well, we did the best that any two little shavers would. We decided to churn and did. Then we left the churn with a lot of buttermilk in it sitting in the kitchen and went off to play. I supposed we never latched the kitchen door good and an old sow and about a dozen little pigs came along and went in that kitchen. Of course, they smelled the buttermilk the first thing and over went the churn. When we arrived on the scene, the floor was as slick as a skating rink. They had rooted the milk all over the floor."

"We slipped up and shut the door and then the fun began. The floor was slick and neither hogs or us could stand up on it. I got the broom and Ray got the mop. Such a bedlam -- pigs squealing, boys yelling and laughing! We could chase them until we gave out and then sit down and laugh. We never once thought of what they were doing to mother's kitchen. Anyway, we flogged them until they were so tired they were laying all over the floor and then we opened the door and let them out."

According to the story, " The sow belonged to Bob Aitkens that lived on the south side of the town section. I don't think she ever did come back to our kitchen."

In the fall, W. F. traded a horse for W. S. Dewey's claim on Haycreek. Then they started working on the house using the lumber from the Dumas house. The land had a little one room dugout in the side of a hill. It was remodeled and two more rooms were added.

The family history relates, "Haycreek was as near a paradise as could be from the cold bleak winters we had spent in Dumas. Before there was any convenience there, the water would freeze up at the old county wells. There was no wood nearer than 20 miles, no coal at all and we had to drive to Channing for our groceries. There were no gardens and very little feed for the cattle. I'll tell you, people now days don't know what it was like to live in a new country where it was 40 miles to anywhere. I think Heaven will be full of the folks that went through all that and still believed in a hereafter."

The Bennett family lived through those difficult times with colorful stories to tell. Descendants of W. F. and Mary Frances Bennett still live in the Haycreek area.