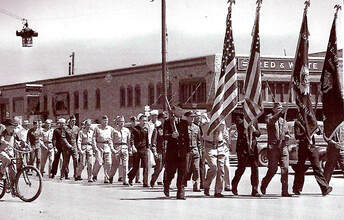 World War I officially ceased with the signing of the Treaty of Versailles on June 28, 1919 in the Palace of Versailles in France. Fighting had ceased seven months earlier when an armistice between the Allied Nations and Germany went into effect on the eleventh hour of the eleventh day of the eleventh month or November 11, 1918 and was regarded as the end of "the war to end all wars."

The date was known as Armistice Day and was first observed in November 1919. The concept was that the celebration would be a day of parades, public meetings and a brief suspension of business beginning at 11 a.m.

The holiday was originally to honor veterans of World War I, but in 1954, after World War II and The Korean War, Congress amended the Act of 1938 by changing the word "Armistice" to "Veterans."

The uniform holiday act which included Veterans Day, was signed in June of 1968 and was intended to make three-day holidays for Federal employees by making the observance on Mondays.

Moore County veterans were honored in 1946 with a parade through downtown, a ceremony at the courthouse and a recognition of Gold Star mothers.
More Bits of History