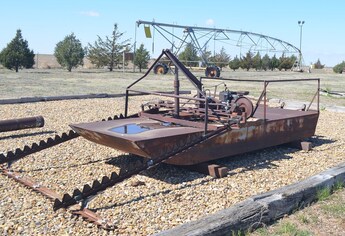 Aquatic Weed Cutter
An unusual donation came to Window on the Plains Museum that probably most museums do not have. It is an aquatic weed cutter, a donation from Rex and Susan McCloy, owners of Blue Ranch, previously Coon Ranch.

The ranch was originally purchased  by Richard S. Coon in 1915. It was left to his nephew, W. H. Coon in 1951. John Coon inherited the ranch on his father's death in 1997. The ranch today is being managed by Mike A. Turner.

The weed cutter is mounted on a small pontoon platform and was used to cut weeds and grasses from small lakes. The cutter will reach a depth of five feet to trim unwanted growth.

There are not many places in the Texas Panhandle where a piece of equipment like this is needed, but there used to be.

Just a couple of miles south of Dumas in the northwest part of the ranch was a lake, appropriately named Coon Lake.

A dam was constructed across Big Blue and the Coons began work on getting the lake stocked with fish.

Papers were sent to Washington D. C. as early as 1920's requesting the fish to be stocked accompanied with letters from local supporters. One letter in the museum's archives, dated in 1928. is from Bob Powell addressed to Hon. Marvin Jones, Washington D. C. reads "am sure we would soon have some bass fishing there is we could get the lake stocked, and hope you can get us supplied."

In the description for the fish permit, "the lake is described as 20 miles in length, 5 feet to 30 feet wide and as much as 10 feet deep. It is spring fed and empties into the Canadian River." 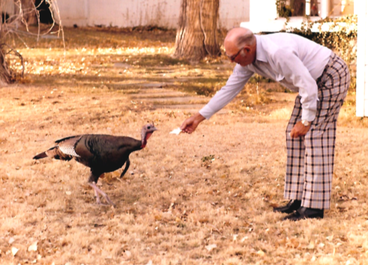 H. Coon
When the site was approved to be stocked with fish, a letter from Washington had specific instructions as to how they would receive the fish shipment. Coon was to be "notified 10 to 60 days beforehand of the proposed date of shipment. On the actual date of delivery, or the previous day, a telegram is sent designating the train on which the fish will arrive."

As early as the 1920's there was talk about fishing on the "Blue". A letter from Bob Powell to H. Coon talks about "keeping tackles tight when those fish get large down on the "Blue." Evidently, one of Powell's fishing tools used on a fishing trip to the lake was found in Coon's vehicle in Oklahoma sometime later. In the letter, Coon and Powell were talking about another fishing trip when the lost tool could be returned.

In an interview with Herb Harter in The Moore County News-Press, Herb Harter said one of his fondest memories is a "10-year period when he, Homa Grant, hardware store owner and city commissioner worked with H. Coon to start and maintain a fishing lake for Club Members in the Dumas area. According to Harter, Mr. Coon had an idea about how his property could be used that would allow area people a fishing and recreation lake."

According to the interview with Harter, "Mr. Coon called one morning and asked if they thought it was possible to find 50 people who would contribute $50 annually for a family membership in a fishing club. That same evening Herb and Homa took Mr. Coon 50 signed checks and all the legal work to create a non-profit corporation called the Moore County Outdoor Social Club. What followed was about 10 wonderful fishing years where a very helpful and generous Mr. Coon allowed the members to use his land."

Over the years, drought has dried up the lake, the fishing club was disbanded and the spring water that filled the lake is gone.

Now, the aquatic cutter sits on dry land along the walking trail at the museum.