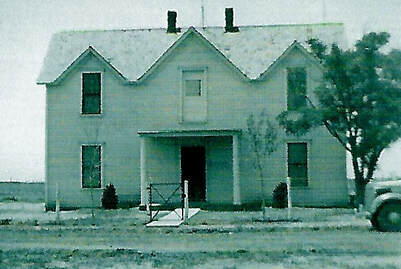 Ansley home
Early settlers in the Panhandle found a sparsely settled cattle country with little promise of the vast industrial developments that lay ahead. There were little conveniences of life, not even an established means of transportation.

Benjamin Thomas Ansley moved his family from the Hill Country to Moore County because he "liked the land and he liked the men who were settling it." At that time Dumas had a courthouse, a store, a school, and a stage shop.

He settled in and built a home, bringing the limber from another house in Wilbarger. They hauled it in wagons and forded the Canadian River to get to Dumas. Before long, he established a business and reared his family of four sons and two daughters.

Ben Jr. taught school, went into the real estate business and married Goldie Nalley. They were parents of six sons and one daughter. Sisters Rebecca and Della were also teachers.

Dumas did not offer much to settlers in the beginning and people would stay awhile, then move on. Ben decided to move his family to Channing and began teaching there in 1903. When signs of new building activity began in Dumas, Ben and his family moved back to Dumas and built his own home here. Soon he was busy teaching school again. The school was small and most students came from nearby ranches.

Ben, with his town brothers, Dan and Sam and sisters, Della and Rebecca, and uncle Tome Smyre established a mercantile firm known as Smyre and Anthony. The store sold "everything from a pin to a steam engine," according to an interview with Ben in 1945. The partnership included Ansley Realty Company with offices in Channing and eventually in Plainview and Amarillo. Uncle Sam sold his part of the mercantile firm to the Ansleys in 1907.

Supplies were freighted from Channing to Dumas by wagon train, drawn by six mules. The partners decided one partner needed to be in Channing to handle the shipment of goods. Ben took over the job and opened a land office there in addition to his freighting duties.

In the 1945 interview, Ben said, "Farmers were beginning to plow under the buffalo grass to plant wheat and other grains, but much of the country was still unfenced and land was cheap, compared to present day values. Much of it was state school land that had not yet come up for sale, and it was common practice for a man to stake a claim, build a shack, then sell his claim to the land without ever having a deed or paid a dollar on it."

"I knew of the claim to one piece of land near Dumas that was sold four times before the land ever came up for sale." Ben continued, "The first man staked his claim, got tired of waiting for the state to put the land up for sale and sold his claim for a a $100, but received no money at the time. The second man sold his claim to the land for $200, and the third man sold the claim to Henry Horn, county clerk of Hartley County for $500. When the land came up for sale Mr. Horn had first chance at and bought it from the state and that very day all four met to pay off their debt against the claim, from Mr. Horn's $500 down to the original sale of $100. Several years had passed and not a dollar bill had changed hands until that day and not a paper was signed until Henry Horn got his deed to the land. That sort of thing was happening all the time and not a man dared to jump a claim."

Ansley Realty Company
Ben reflected that people were more honest in that day. There were unwritten laws that grew out of their way of life, and all men knew these laws had to be obeyed. No home was ever locked. Some traveler might be along who needed food and shelter and he was free to walk in, eat and sleep, but nothing about the home must ever be molested and "woe be unto the man who failed to wash his dishes after eating."

Ben remembered an interesting that happened, "Smyre and Ansley operated a small bank in connection with the store for the convenience of the customers. Once a panic hit, and people rushed into the store for their money, but we never kept much money on hand. My brother hurried the old German who drove the wagon train to Channing to have me send them money to take care of the emergency and also to get a load of goods."

By night Ben had raised $1000 in silver and green backs. "The old German whose name was Heichman, I believe, put the money in a wash tub on top of his load of freight, and poured several sacks of beans over it," Ben related.

"The next night he pulled up in front of the store in Dumas very late, unhitched the mules, and went up to the Ansley homeplace, and went to bed. Sometime in the early morning he awoke with a start, remembering the money in the bottom of the wash tub out on the main street of Dumas. He jumped out of bed and ran like a blue streak down to the wagon, but not a thing had been disturbed. Things never seemed to be disturbed in those days, regardless of their value."

Mr. and Mrs. Ansley moved to Plainview in 1908 and Mr. Ansley continued in the land business with his two brothers and two sisters. In 1916, he moved to Amarillo and established Ansley Land and Cattle Co. The partnership with his brothers and sisters lasted over 40 years. Dan left Dumas for a time, then returned and worked in his wife's family business, Phillips & Son, retiring in 1948. He was named Dumas Noon Lions Club "Old-Timer of the Year" in 1968.

​​​Compiled from articles from the archives at Window on the Plains Museum and an article in The Amarillo Times on Sunday, July 29, 1945, by Hazel Cooke Upshaw.