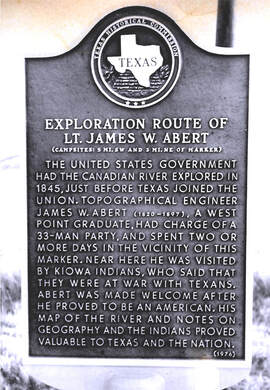 Exploration Route of
Lt. James W. Abert
(Campsite: 5 mi. SW and
​3 mi. NE of Marker)
The United States government had the Canadian River explored in 1845, just before Texas joined the Union. Topographical engineer James W. Abert (1820-1897), a West Point graduate, had charge of a 33-man party, and spent two or more days in the vicinity of this marker. Near here he was visited by Kiowa Indians, who said that they were at war with Texans. Abert was made welcome after he proved to be an American. His map of the river and notes on geography and the Indians proved valuable to Texas and the nation.
In the summer of 1845, Lt. James W. Abert was part of the third expedition of John Charles Fremont whose assignment was to explore southward and eastward from Fort Bent along the Canadian River through Kiowa and Commanche territory. The survey was an important part of the United States annexation of Texas.

Fremont chose to take the main party on to California and gave command of the Canadian River mission to Abert with an assistant, Lt. William G. Peck.

Legendary mountain man Thomas "Broken Hand" Fitzpatrick was the party's guide. John Hatcher and Caleb Greenwood were hunters. The entire party was comprised of civilians except for the two young officers. This was to be the first official exploration to pass through Moore County.

Abert and his men left Bent's Fort on August 12 and spent the next two months marching eastward. The expedition struck the headwaters of the Canadian and followed it through the breaks in eastern New Mexico and into the Texas Panhandle.

Abert kept a daily journal and noted many landmarks in his writings. He also was an adept artist and made drawings of the plants, trees and animals he found. His drawings of the Native Americans are some of the earliest found.

Following the northern banks of the Canadian River, Abert's map marked the locations of Atascosa Creet and the Alibates Flint Quarries (which he labeled Agate Bluffs).

Abert camped in Moore County (near where the historical marker has been placed) on September 12, 1845. While camped there, they were visited by a large group of Kiowa Indians. The Indians were friendly to them after they proved they were Americans and NOT TEXANS.

Abert's drawings and description of the Kiowa Indians was contrary to what had previously been known about them. He describes them as brave, energetic, and honest. In contrast, he described the Commanche Indians as just the opposite.

The expedition arrived at Bent's trading house in what is now Hutchinson County on September 14. They rested for a day and exchanged gifts with a party of Kiowas and Comancheros.

One September 16, they crossed the Canadian and turned southeast. Near the site of present Laketon in Gray County, the party found the North Fork of the Red River and followed it for a while. Then, they turned back northeast toward the Canadian crossing into Oklahoma.

They continued to follow the Canadian to its confluence with the Arkansas.

There the party disbanded and the two officers went to St. Louis, arriving on November 12.

In his reports, Abert described in detail the geology, flora and fauna of the Canadian valley. His maps of the region were the most accurate of the time, and later explorers found them quite useful, especially in finding campsites and watering places.

Returning to Bent's Fort, Abert conducted surveys of most of New Mexico. Form 1848 to 1850 he served on the faculty of West Point. He was promoted to first lieutenant in 1853 and to captain in 1856. He served in Florida for two years and then traveled in Europe to study military affairs and arsenals.

When the Civil War broke out, he served in the Shenandoah valley from June 1861 to September 1862. He was promoted to major and was assigned to the US Army Corp of Engineers on March 3, 1863.

He later suffered an injury by a fall from his horse and in 1864, he resigned from the army.

He and his family engaged in the mercantile business in Cincinnati, Ohio for a time and then he served as examine of patents in Washington.

He taught English literature at the University of Missouri from 1877 to 1879 and then became president of the Examining Board of teachers of Public Schools in Kentucky.