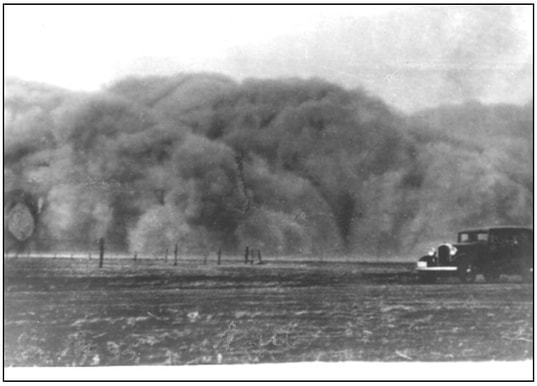 "And this beautiful afternoon, of course, the young folks were all there, and they decided it was so nice, it would be just wonderful if they could go down to Boys' Ranch or Old Tascosa."

"Everyone went to that locality for our picnics. And Mrs. Brown's brother-in-law had a truck. And he went home and got his truck and brought it to the schoolhouse. And all the young people from about four years of age on up to teenagers piled on the truck. They put some hay or some straw and some comforters over it. And they had a man and his sister who were Mr. Cy Clark and his sister who lived with him, and another lady, Mrs. Washa, and they went as sponsors."

"And, of course, when this storm came, it just came like that. I can't tell you the speed of it. I have never seem anything like it. As I said, everything was perfectly serene and beautiful."

"I had one very little child, about two years old, and it was evening and chore time and my husband had gone to milk the cows. So I sent the little girl out to the woodpile to gather up chips for our kindling. And she was out there, and I looked out the window, the north window, to see how she was. And here came this terrible cloud." 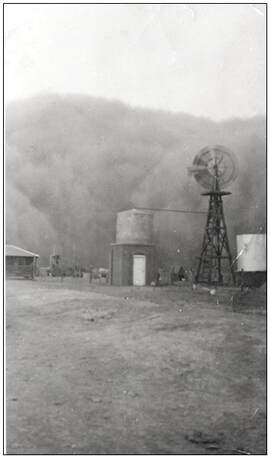 "So, I ran as fast as I could, and picked up my little girl and started for the barn to tell my husband. I do not know how to describe it. And just like that, it was utter darkness. And we stood just inside the barn . . . couldn't see one thing. And after we'd stood there a little, it began to get quite cold. And we tried to get to the house. We took hold of hands. We couldn't see ahead at all. But through this maze of dirt we could see down a little bit. And we had a little trail from the house to the barn. And that's the way we got to the house, by trying to distinguish the trail."

"And when we got inside it, inside our house that was all closed, there was such a haze of dirt, inside the house even, just like when you see a whirlwind come. It was just like dark. And, of course, we had no electricity. We had kerosene lamps. We lighted a lamp, but it would not penetrate the darkness in the house."

"And, of course, our concern for our children who were so far away from home was beyond description. And, we existed in that terrible condition. The storm began to let up a little bit about 11 o'clock that night. But it was still blowing badly. It was about one or one-thirty in the morning when we heard the children drive up in front of the house, and we heard them laughing. That was the best music I ever heard, because we knew if they were laughing everything was okay."

"But they had had a terrible experience. It had turned so very cold. And when the storm struck at Boys' Ranch, it blew everything off the truck. I think they saved one comforter. And the children were scattered as children do when they go on a picnic. And it was quite difficult to get them assembled. And they got them on the truck, and then they had such a time trying to drive up to Channing."

"Remember, no paved roads or anything then. And two of the older teenage boys, and I think Gene was one of them, because Mr. Clark was driving the truck, and one of the Hardaway boys, and they laid on the fenders to look down. As I told you, just as we had to walk  from the house to the barn, tp try to see the ditch along the road or the trail, whatever it happened to be."

"And in that manner, after several hours they got to Channing and they were nearly frozen. So they stopped at the depot. And they had an old, what we call, a pot-bellied stove. And they built a fire in that and warmed for about an hour. And by that time it was beginning to let up a little bit. And where we live is about ten miles east of Channing, and they made it to our house."

"It wasn't a destructive storm. It was just carrying so much dirt. Everything was completely covered with dirt. And after those storms, we didn't sweep the dirt out, we scooped it off of the floor, carried it out in bucketfuls, or in tubs. It was just an existence. It's the worst storm that I have ever seen."
More Bits of History